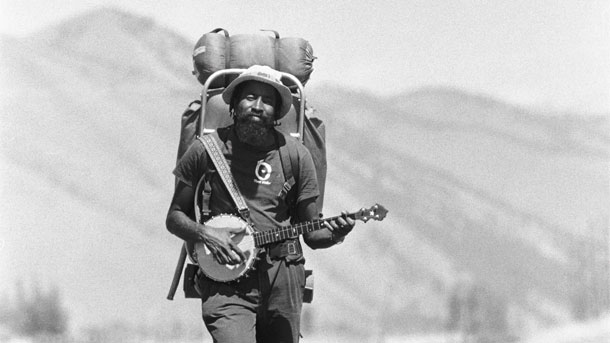 by admin / in Lead community, Purpose

Change your world one step at a time

Some weeks ago, a friend sent me the link to an amazing video.

John Francis, known as the PlanetWalker, became an environmentalist after seeing 2 oil tankers collide under the Golden Gate Bridge in 1971, spilling more than a half-million gallons of oil.

In response, he gave up driving or riding in a car or indeed any motorised vehicle.

Arguing with friends about what he was doing and whether one man could make a difference was exhausting, so he stopped talking too.

Picking up his banjo, he started walking in silence.

What started out as a one day protest became one year, then finally seventeen years.

In the external silence, the internal voices started to go quiet and he got to hear what was truly important to him beneath the babble.

Interspersed with walking across the US, Francis educated himself and started teaching – all without using his voice.

Francis became the voice of environmentalism

Francis found himself  in Washington writing oil pollution regulations.  Finally, he was writing about something close to his heart.

Speaking at TED in 2008, he shared his story as well as the personal insights that led to questioning and redefining himself along the way.

John Francis’ story really touched me.  He had the courage of his convictions.  He truly believed that one man could make a difference and he set out to prove it.

What can we learn?

While we don’t need to go to that extreme, we can learn or be reminded of some important lessons through his message:

The question for us is:  “What do we need to do in order to see who we really are, what is important to us and to speak our truth?”  I can assure you, it’s not necessarily easy and it is always worthwhile.

What do you think?  I’d love to hear.